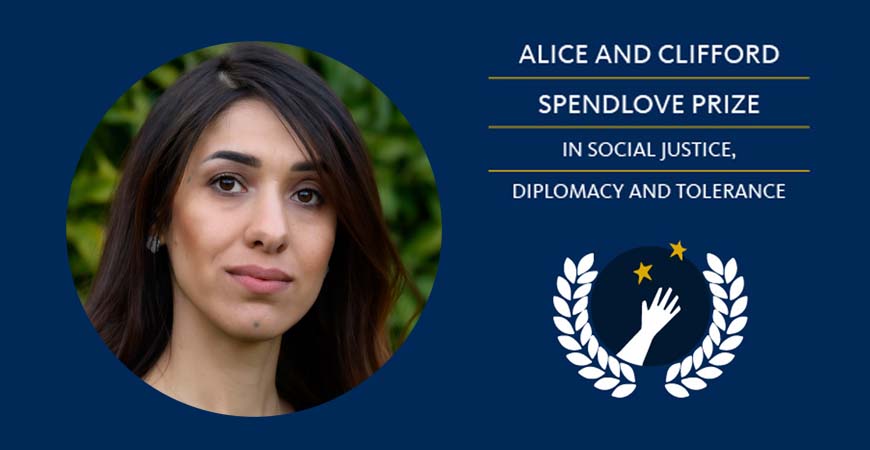 Nadia Murad will be honored with the Spendlove Prize during a virtual ceremony on Nov. 3.

Human rights activist Nadia Murad has been selected as the 14th recipient of the Alice and Clifford Spendlove Prize in Social Justice, Diplomacy and Tolerance. The 2018 Nobel Peace Prize recipient will be honored during a virtual ceremony on Nov. 3.

Murad is an advocate for survivors of genocide and sexual violence. Her New York Times bestselling memoir "The Last Girl: My Story of Captivity, and My Fight Against the Islamic State" provides a harrowing account of the genocide against the Yazidi ethno-religious minority in Iraq and Murad's imprisonment by the Islamic State.

Merced native Sherrie Spendlove, who in 2005 established the Spendlove Prize in honor of her parents, Alice and Clifford, identified some of the atrocities Murad and her community experienced.

"One of the greatest injustices that exist is that innocent women and children bear the backlash of the violence of any war or armed conflict," she said. "Nadia Murad, a young Yazidi woman from northern Iraq, experienced this travesty of justice. In August 2014, ISIS committed genocide against her people, her entire village and her family. They also kidnapped very young female children along with Nadia and her sisters for the purpose of sex trafficking."

After escaping captivity, Murad began speaking out on behalf of her community. Murad is the founder and president of Nadia's Initiative, a nonprofit dedicated to rebuilding communities in crisis and advocating for survivors of sexual violence. Nadia's Initiative's current work is focused on the sustainable redevelopment of the Yazidi homeland in Sinjar, Iraq, and pursuing holistic justice for survivors of ISIS atrocities.

Much of Murad's advocacy work is focused on meeting with global leaders to raise awareness of the genocide against the Yazidi people and the systemic use of sexual violence as a weapon of war. She and her team have advocated for legislation that protects and promotes women's rights, as well as drafted and advocated for the passage of resolutions to expand the United Nation's commitments to end sexual violence in conflict.

In 2016, Murad became the first UN Goodwill Ambassador for the Dignity of Survivors of Human Trafficking. She was also awarded the Council of Europe Václav Havel Human Rights Prize and Sakharov Prize for Freedom of Thought. Two years later, Murad won the Nobel Peace Prize with Dr. Denis Mukwege. Murad was appointed as a UN Sustainable Development Goals Advocate in 2019.

"The Spendlove Prize supports Nadia's righteous quest to bring ISIS to the International Court of Justice for their egregious crimes against humanity and her life's work to help other survivors of genocide and human sex trafficking to heal and rebuild their communities through her program Nadia's Initiative," Spendlove said.

"We are delighted to have Nadia Murad join the growing number of recipients of the Spendlove Prize," School of Social Sciences, Humanities and Arts Dean Jeffrey Gilger said. "Alice and Clifford Spendlove focused their careers on improving the lives of others — something that Nadia is working tirelessly to accomplish as well."

The award, made possible by a generous gift from Spendlove, recognizes a renowned scholar, author, artist or citizen who exemplifies, in their work, the delivery of social justice, diplomacy and tolerance in the diverse local and global society. The recipient serves as a role model and inspiration for students, faculty, staff and the community surrounding UC Merced.

The Spendlove Prize Selection Committee is chaired by the dean of the School of Social Sciences, Humanities and Arts and includes a representative from the Spendlove family or a designee, an undergraduate student, graduate student and representatives from the UC Merced community. This year, the award committee is chaired by Gilger and includes Sherrie Spendlove as family representative, Department of Literatures, Languages and Cultures Professor Nigel Hatton as a member of the faculty, and Lee Anderson and Charlie Bennet as community members.

The free virtual event on Wednesday, Nov. 3, starts at noon. Those interested in watching are asked to register online. Anyone with questions can email specialevents@ucmerced.edu.