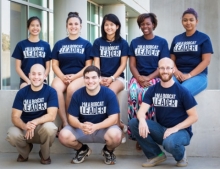 “I decided that I was going to change,” Fang said. “I wanted to be more outspoken.”

Fang found the confidence, skills and foundation she needed by completing a variety of leadership programs on campus. Now she’s starting work as an intern in the Margo F. Souza Leadership Center.

“I’m excited about my new job,” Fang said. “I have been through all of these programs, and now I will be part of it from a different perspective.”

Leadership has been a consistent focus of the UC’s 10th and newest campus, and a growing number of programs always have been available. But a new dimension at UC Merced is the center established through a $1 million donation by prominent businesswoman Margo Souza.

Souza, the former president and CEO of Turlock’s Circle H. Dairy Ranch Inc., made the pledge in 2013 that created the center housed within the Office of Student Life.

“This is a better service to our students because they can go to one place,” said Steve Lerer, the assistant director of Student Life who coordinates the Souza Leadership Center. He said roughly 2,000 students — about 40 percent of the campus — have taken part in at least one leadership program or workshop. The goal is to raise that percentage even higher.

Students who complete the Bobcat Leadership Series, the first of a three-tier leadership certification program, have an advantage when applying for some student jobs in student affairs. Leadership skills also are valuable in nearly all areas of life — from civic engagement and volunteerism to the workforce.

“Companies are looking for people who can lead others,” Lerer said.

Fang, a management major from San Francisco, is one of the leadership program’s biggest advocates. Now in her third year, she heard about the Bobcat Leadership Series as a freshman and started there.

“I wanted to expand and improve on my leadership skills and this was a great place to do that,” Fang said.

Fang hasn’t decided on a career path after completing her management degree.

“I want to keep my doors open to opportunity,” she said.

Lerer said many of the students who participate have heard about leadership programs from a friend. That was the case for Presley Ramirez, an earth systems science major from Sacramento.

He has completed several leadership programs and also participated in the Leadership Conference and entrepreneur training.

While Ramirez earned awards for leadership in high school, he said he realized the true meaning of being a leader through the UC Merced programs. He’s applied his new skills in several ways, such as helping transform the wrestling team into a competitive club sport on campus.

Ramirez, now in his third year at UC Merced, plans to attend graduate school after finishing his degree. He also wants to become an entrepreneur in an area related to his major.

“The Leadership Center is a good resource to have on campus,” he said. “These programs help prepare me for my professional career path.”

For more information, contact the leadership center at lead@ucmerced.edu or 209-228-4228.