Most students don’t arrive at UC Merced by way of Germany and Hawaii.

But graduate student Bodo Winter often takes a unique path. Now in his third year, this Ph.D. candidate in Cognitive and Information Sciences has immersed himself in research, collaborated and published multiple articles and taught workshops on statistical methods around the world. He has presented his research at several international conferences, including the International Cognitive Linguistics Conference in Canada and the Cognitive Science Society Meeting in Berlin, Germany. 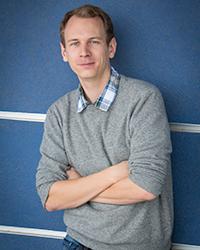 “Two and a half years in, it’s been a great fit for him,” said Teenie Matlock, Winter’s faculty adviser and frequent collaborator. “After coming to us from the Max Planck Institute for Evolutionary Anthropology, he hit the ground not just running, but sprinting.”

Winter, who won an Outstanding Graduate Student Teaching Award in 2012, is part of an interdisciplinary program that integrates methods and approaches from linguistics, psychology, philosophy, neuroscience and computer science. Other awards include a fellowship from the Linguistics Society of America Institute.

Some of Winter’s research relates to metaphors and how they are part of everyday thought and speech. He also is examining how people perceive numbers and numerical quantities, including the use of hand gestures to indicate big or small numbers.

“We tend to think about numbers in terms of space,” he said.

Gaining a better understanding of that vital link between space and numbers could lead to development of therapies or teaching techniques that help people who struggle with numbers or have disorders relating to math.

Matlock said students like Winter demonstrate how the Cognitive and Information Sciences program is growing to attract world-class students and compete with other top universities.

Winter spent a year as a doctoral fellow and research assistant at the Max Planck Institute for Evolutionary Anthropology in Germany before deciding to pursue a Ph.D.  While he applied to other universities, Winter wanted to work with Matlock and attend the University of California’s 10th and newest campus.

“I knew for sure that I wanted to go back to America, and I wanted to be at UC Merced,” he said. “I was caught up in the spirit of this being a really new university.”

Part of the attraction was an open-minded faculty, collaborative approach and the opportunity to immediately become involved in research, he said.

Matlock described Winter as organized, hard-working and imaginative. He also is a strong leader and a superb mentor for undergraduate students, she said.

“Bodo embodies the goals of our program, to maintain active research in a collaborative spirit, cutting across disciplines, and successfully communicating that research to a very broad community of scientists,” he said.

Winter said he has benefited greatly from his work with Matlock, one of UC Merced’s founding faculty.

“She’s extremely supportive,” he said. “She also has a great sense of writing and how to frame a research article to make it relevant and accessible.”

Winter also is busy away from UC Merced. Last summer, he participated in several conferences and summer schools and taught workshops in Denmark, Germany and Arizona.

The workshops focused on new statistical techniques that can be used to analyze complex research data. After teaching himself the material, Winter turned his learning process outwards by breaking down complex statistical methods to researchers from different fields.

After completing his Ph.D., Winter plans to continue his research and may pair that with teaching.

Winter already has recommended UC Merced and the cognitive science program to other students — including a current grad student from Germany.

“This department is really quite unique,” he said. “They have a vision of what cognitive sciences can be, and a collaborative approach that I really like.”