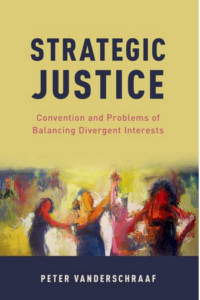 In Strategic Justice, Peter Vanderschraaf argues that justice can be properly understood as a body of special social conventions. The idea that justice is at bottom conventional has ancient roots, but has never been central in philosophy because convention itself has historically been so poorly understood. Vanderschraaf gives a new defense of this idea that integrates insights and arguments of past masters of moral and political philosophy together with recent analytical and empirical concepts and results from the social sciences. One of the substantial contributions of this work is a new account of convention that is sufficiently general for summarizing problems of justice, the social interactions where the interests of the agents involved diverge. Conventions are defined as equilibrium solutions to the games that summarize social interactions having a variety of possible stable resolutions and a corresponding plurality of equilibria. The basic idea that justice consists of a system of rules for mutual advantage is explored in depth using this game-theoretic analysis of convention. Justice is analyzed as a system of conventions that are stable with respect to renegotiation in the face of societal changes such as resource depletion, technological innovation and population decline or growth. This new account of justice-as-convention explains in a cogent and natural way what justice is and why individuals have good reason to obey its requirements. Contrary to what many have thought, this new account shows how the justice-as-convention view can give a good account of why justice requires that the most vulnerable members of society receive protections and benefits from the cooperative surplus created by general compliance with justice.