Out of Oakland: Black Panther Party Internationalism During the Cold War 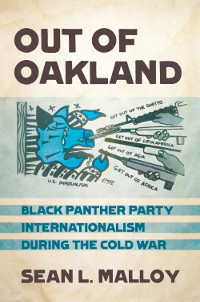 In Out of Oakland, Sean L. Malloy explores the evolving internationalism of the Black Panther Party (BPP); the continuing exile of former members, including Assata Shakur, in Cuba is testament to the lasting nature of the international bonds that were forged during the party's heyday. Founded in Oakland, California, in October 1966 by Huey P. Newton and Bobby Seale, the BPP began with no more than a dozen members. Focused on local issues, most notably police brutality, the Panthers patrolled their West Oakland neighborhood armed with shotguns and law books. Within a few years, the BPP had expanded its operations into a global confrontation with what Minister of Information Eldridge Cleaver dubbed "the international pig power structure." Malloy traces the shifting intersections between the black freedom struggle in the United States, Third World anticolonialism, and the Cold War. By the early 1970s, the Panthers had chapters across the United States as well as an international section headquartered in Algeria and support groups and emulators as far afield as England, India, New Zealand, Israel, and Sweden. The international section served as an official embassy for the BPP and a beacon for American revolutionaries abroad, attracting figures ranging from Black Power skyjackers to fugitive LSD guru Timothy Leary. Engaging directly with the expanding Cold War, BPP representatives cultivated alliances with the governments of Cuba, North Korea, China, North Vietnam, and the People’s Republic of the Congo as well as European and Japanese militant groups and the Palestinian Liberation Organization. In an epilogue, Malloy directly links the legacy of the BPP to contemporary questions raised by the Black Lives Matter movement.

Sean L. Malloy is an Associate Professor of History and Critical Race and Ethnic Studies (CRES) at the University of California, Merced. He is the author of Atomic Tragedy: Henry L. Stimson and the Decision to Use the Bomb Against Japan (Cornell University Press, 2008) as well as articles dealing with nuclear targeting in World War II and the radiation effects of the atomic bomb. His most recent book, Out of Oakland: Black Panther Party Internationalism During the Cold War , was recently published by Cornell University Press in 2017. His current research project examines the battle in the United States over BDS (Boycott, Divestment, and Sanction) in response to the Israeli occupation of Palestine.