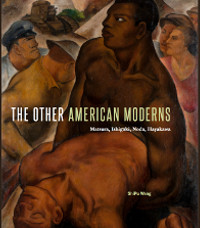 In The Other American Moderns, ShiPu Wang analyzes the works of four early twentieth-century American artists who engaged with the concept of “Americanness”: Frank Matsura, Eitarō Ishigaki, Hideo Noda, and Miki Hayakawa. In so doing, he recasts notions of minority artists’ contributions to modernism and American culture.

Wang presents comparative studies of these four artists’ figurative works that feature Native Americans, African Americans, and other racial and ethnic minorities, includingMatsura and Susan Timento Pose at Studio (ca. 1912),The Bonus March (1932), Scottsboro Boys (1933), and Portrait of a Negro (ca. 1926). Rather than creating art that reflected “Asian aesthetics,” Matsura, Ishigaki, Noda, and Hayakawa deployed “imagery of the Other by the Other” as their means of exploring, understanding, and contesting conditions of diaspora and contested notions of what it meant to be American in an age of anti-immigrant sentiment and legislation.

Based on a decade-long excavation of previously unexamined collections in the United States and Japan, The Other American Moderns is more than a rediscovery of “forgotten” minority artists: it reconceives American modernism by illuminating these artists’ active role in the shaping of a multicultural and cosmopolitan culture. This nuanced analysis of their deliberate engagement with the ideological complexities of American identity contributes a new vision to our understanding of non-European identity in modernism and American art.

ShiPu Wang is Associate Professor and founding faculty of the Global Arts Studies Program (GASP) at the University of California, Merced. He is the author of Becoming American? The Art and Identity Crisis of Yasuo Kuniyoshi. He also curated and wrote the catalogue for Chiura Obata: An American Modern.