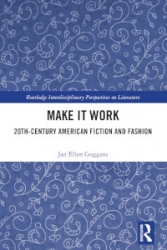 Imagine a new critical theory that bases its literary value on fashion. In this theory exists a community that explores and interrogates conventionality, and in American literature of the 20th century, it includes fashion and home decoration, two paths to achieving white femininity, a prized component of many novels written by and for women. Drawing on cultural materialism and its connection to the cultural forms of objects, including apparel, Making it Work: 20th Century American Fiction and Fashion provides readers a new understanding of the aims of American writers, and the desires of their readers.

Jan Goggans is an associate professor and founding faculty at University of California Merced. She published California on the Breadlines: Dorothea Lange, Paul Taylor, and the making of a New Deal Narrative in 2010.