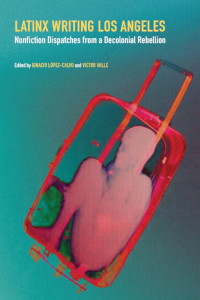 Routinely hyped but hardly mythified like New York City, Los Angeles is a megalopolis that lends itself to deeply conflicted feelings among its inhabitants and those who frequent it. There is no more deeply conflicted group than the Mexican Americans whose roots antedate almost anyone else’s in that now vast urban space. López-Calvo and Valle have assembled an intriguing anthology of how and what Mexican Americans and other US Latinos think about Los Angeles. Its other virtue, a provocative pair of essays on the city's literary culture, proposes a critical agenda for reimagining an urban practice of humanities at this time of anti-immigrant hysteria.

Ignacio López-Calvo is UC Merced Presidential Endowed Chair in the Humanities and Professor of Latin American literature. He is the author of more than ninety articles and book chapters, as well as eight monographs and twelve edited books on Latin American and U.S. Latino literature and culture. He is the co-founder and co-executive director of the academic journal Transmodernity: Journal of Peripheral Cultural Production of the Luso-Hispanic World as well as the co-executive director of Palgrave Macmillan book series “Historical and Cultural Interconnections between Latin America and Asia” and the Anthem Press book series “Anthem Studies in Latin American Literature and Culture Series.”