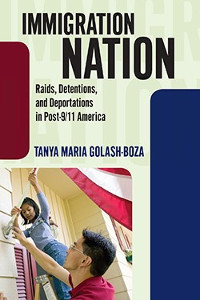 In the wake of September 11, 2001, the Department of Homeland Security (DHS) was created to prevent terrorist attacks in the US. This led to dramatic increases in immigration law enforcement - raids, detentions and deportations have increased six-fold. Immigration Nation critically analyses the human rights impact of this tightening of US immigration policy. Golash-Boza reveals that it has had consequences not just for immigrants, but for citizens, families and communities. She shows that even though family reunification is officially a core component of US immigration policy, it has often torn families apart. This is a critical and revealing look at the real life - frequently devastating - impact of immigration policy in a security conscious world.

Link to buy the book: https://www.routledge.com/Immigration-Nation-Raids-Detentions-and-Deportations-in-Post-9-11-America/Golash-Boza/p/book/9781594518386