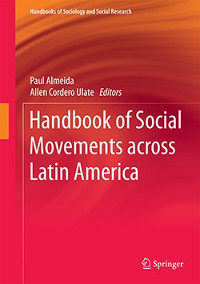 This handbook covers social movement activities in Latin American countries that have had profound consequences on the political culture of the region. It examines the developments of the past twenty years, such as a renewed upswing in popular mobilization, the ending of violent conflicts and military governments, new struggles and a relatively more democratic climate. It shows that, from southern Chiapas to Argentina, social movements in the 1990s and especially in the 2000s, have reached new heights of popular participation.