Gender, Culture and Politics in England, 1560-1640: Turning the World Upside Down 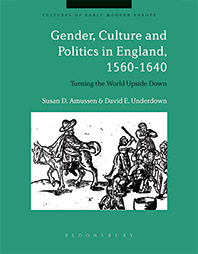 Susan D. Amussen and David E. Underdown examine political scandals and familiar characters-including scolds, cuckolds and witches-to show how their behavior turned the ordered world around them upside down in very specific, gendered ways. Using case studies from theatre, civic ritual and witchcraft, the book demonstrates how ideas of gendered inversion, failed patriarchs, and disorderly women permeate the mental world of early modern England. Amussen and Underdown show both how these ideas were central to understanding society and politics as well as the ways in which both women and men were disciplined formally and informally for inverting the gender order. In doing so, they give a glimpse of how we can connect different dimensions of early modern society.

This is a vital study for anyone interested in understanding the connections between social practice, culture, and politics in 16th- and 17th-century England.