Forced Out and Fenced In: Immigration Tales from the Field Edited Volume 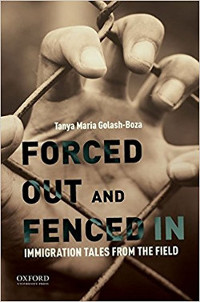 Former President Barack Obama's administration oversaw three million deportations-far more than any previous President, and more than the sum total of all deportations prior to 1997. President Donald Trump has promised to surpass these record numbers of deportations. With mass deportation constantly in the news, students crave a deeper understanding of how we have arrived at this particular historical moment. This collection of powerful essays-written by leading scholars in migration studies-puts a human face on mass deportation by telling the stories of people bearing the brunt of immigration law enforcement. Each narrative in Forced Out and Fenced In: Immigration Tales From the Field centers on a person or a small group of people and places their story within the broader socio-legal and historical context. The authors weave the relevant historical, political, and socio-legal analysis throughout each essay, yet the narrative remains the most important element in each piece.

Link to buy the book: https://amzn.to/2iadjNv