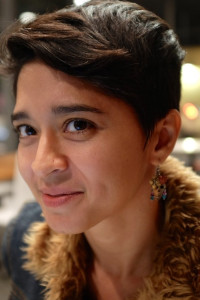 Felicia Rhapsody Lopez is a builder of bridges and a teller of stories. Coming from the field of Chicana/o/x Studies, she is inspired by Borderlands theory, and in that tradition, her scholarship builds bridges across disciplinary lines and between diverse ancient and contemporary cultures. Her published work focuses on the Visual Culture of Indigenous Nahua of Mexico and Central America, as well as neighboring Indigenous people, specifically through the decipherment of glyphic texts. As a scholar-artist-activist, her upcoming projects seek to continue ancient Indigenous artistic and cultural traditions in order to make these Indigenous epistemologies accessible to diverse heritage populations today.

Felicia Lopez earned her bachelor’s degree from UC Berkeley and her PhD from UC Santa Barbara. She has served as a Postdoctoral Fellow in Religious Studies at UC Santa Barbara, in Native American Studies at UC Davis, and in History at UC Los Angeles. She is currently completing her manuscript on the ancient writing traditions of the Nahua people of Central Mexico, where she provides a model for the decipherment of glyphic texts that is rooted in Indigenous language, culture, and epistemologies. Her current projects also include analyses and criticism of contemporary media and culture with the goal of challenging stereotypical representations of ancient Indigenous people and their diverse descendants.

The Nahuatl word tlahcuiloh can be translated both as writer and as painter. Likewise, in other languages of Mexico and Central America, such as those spoken among Mayan groups, a single word denotes the ritual of writing/painting. Among these Indigenous peoples, the creation of the written word and of painted forms were inseparable. Felicia Lopez is deeply committed to recovering and maintaining the epistemology of Indigenous Nahua writer-painters through the further decipherment of pictorial texts and through the creation of academic and community spaces dedicated to engagement at the intersections of art, language, culture, and activism.