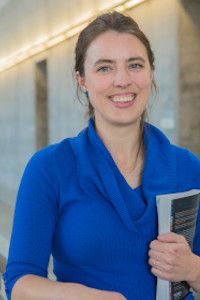 Carolyn Dicey Jennings works at the intersection of philosophy, psychology, and neuroscience as a recently tenured Associate Professor in the Cognitive and Information Sciences program. Before arriving at UC Merced, Jennings was a postdoctoral fellow at University of Antwerp with Bence Nanay’s Between Perception and Action project. In 2012 she graduated with a doctorate in philosophy and a master’s in psychology from Boston University. From 2011 to 2012 she worked with Takeo Watanabe in his Vision Lab, assisting with fMRI and behavioral research.

Jennings has two primary research projects. One has to do with the topic of attention—how we are able to direct our minds through attention and what impact this has on other functions of the mind. Her first book on the topic, The Attending Mind, was published this month with Cambridge University Press. In 2019 she accepted a prestigious fellowship at the Australian National University, at which she gave several presentations on chapters of the book. She also has numerous other publications on the topic of attention that have appeared in top philosophy and interdisciplinary journals.

Her second research project concerns the field of philosophy, for which she has received 5 grants and has mentored many graduate and undergraduate research assistants. This work has centered on placement outcomes in philosophy, with a special focus on diversity and inclusivity. She has published several research reports, blog posts, and a journal article from this work, which is ongoing.

Beyond her research work, Jennings has made significant service contributions to her field, including serving in 3 roles with the American Philosophical Association. She continues to be a member of the APA’s Data Task Force.

Jennings has also engaged in public outreach, writing a popular essay in Aeon that had 90,000 reads in its first month (I attend, therefore I am). She was the main speaker for a recent American Association of University Women’s Dinner with a Scientist event, and she volunteered as neuroscience faculty for the Emory-Tibet Science Initiative in India. She is sometimes asked to provide expert advice to major news outlets, including Wired and NPR.