With more than 400 million speakers worldwide, Spanish is the third most spoken language in the world, and the second in the United States, where it is spoken by upwards of 41 million people. Spanish is also one of the languages most often used in California and in the Central Valley, as well as one of the six official languages of the United Nations. Beyond its relevance in the world, Spanish should also be well represented locally, since the University of California, Merced is a Hispanic Serving Institution. The major in Spanish at UC Merced will provide students with the linguistic skills and necessary cultural background to communicate their ideas in Spanish in different professional contexts, to think critically, and to analyze literary works. In doing so, the major in Spanish will help students to face the demands of an ever more globalized society, one that requires and values linguistic and cultural competence in more than one language.

Most employers appreciate employees with knowledge of a second language, Spanish being one of the languages most demanded. In order to use a language in an efficient manner, the speaker should be familiar with the main social traits that define the native speakers of such a language, as well as with their cultural manifestations, literature and history. Knowledge of the particularities of the language associated with professions is also a relevant tool to relate to and work with native speakers. 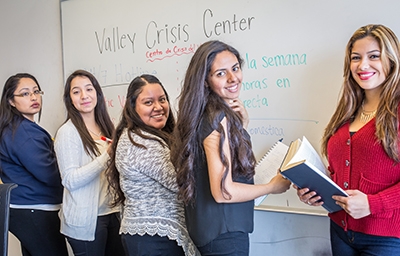 The Spanish major learning goals illustrate the ideals that the faculty members will work towards to support students’ academic experience at UC Merced. The following program learning outcomes (PLOs) describe the specific skills and knowledge base that students will demonstrate upon completion of the major in Spanish.

Refer to the Curriculum Map to see the coherency between the Program Learning Outcomes and our course offerings.